As an ex-pat, digital designer/artist now living in Merida, I get the feeling that the younger generation here is getting ready to transform the country in ways that could make it the envy of the technological world.  The ancient Mayans were considered technological masters in their time so who is to say today's Mexican students won't be as well in the near future?

Because I was raised in the San Francisco Bay Area, I had the good fortune of experiencing early computer innovations of the 1970s  and had seen several technology bubbles come and go between the 1980's through 1990's.  In my short two-year experience in Merida, the spirit of innovation and creativity by the young people is reminiscent of the late 1970's and early 1980's of Silicon Valley.  The big difference is that high-speed Internet is prevalent here and most everyone has a smart phone now. A sure sign of change coming is when you see (and hear) local sellers on bikes or in cars using bullhorns to advertise their wares while riding past young people walking on the sidewalk staring intently into their phones.  It makes me wonder if those still using traditional methods will be fearful and reticent to adopt new technologies (as it did in the U.S) or will they embrace and understand its potential to help them thrive in the future?

In my heyday, I was considered somewhat of a ‘pioneer’ in the ways I used new technology to promote the Arts and to ‘visualize’ concepts in order to save money and time.

I’d like to share one way I do that, here in Merida, with you.
First, here was how our backyard looked in May.
It included 3 trees (1 dead), little stones and a surrounding cement block wall. My wife and I discussed the various ways we could transform it. Since we just experienced the heat of May, we decided to go with  a swimming pool. Never having one before, we knew we wanted something unique but not expensive.

So I turned to a 3D model program I use to virtually remodel and design homes before any actual physical work is done, to help visualize how the pool would look like.

I tried a few different pool sizes and orientations until something felt pleasing and practical. 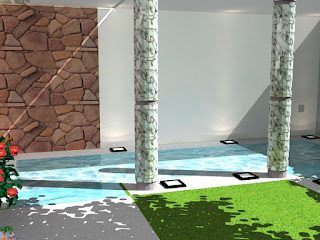 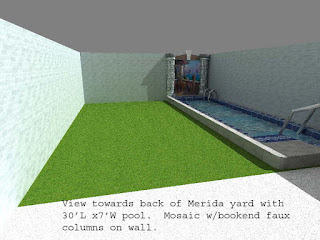 It appeared the pool would be most practical along the back wall, and must include an archway, something I had become fascinated with after traveling through old-world countries. 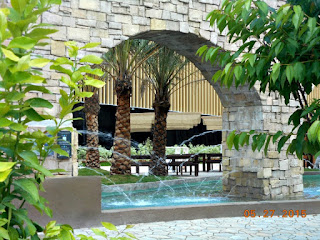 I loved his archway while visiting the World Expo in Milan.

I was inspired by the small pond I saw in Zoo Centenario here in Merida. By the way, did you know Merida and Milan are sister cities? 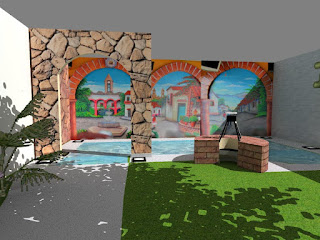 Now that I had a basic pool layout, I played around with images for a mural idea I had for the back wall.

I debated between painting a traditional Mexican scene or a Mayan theme and settled on Mayan walls and symbols after a recent visit to Uxmal. 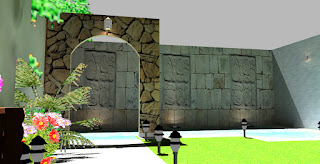 Using Photoshop, I created the mural and mapped it into the program.

Then I added digital lighting schemes and rendered the same image in daytime and night to get a fairly accurate sense of how things are lit. 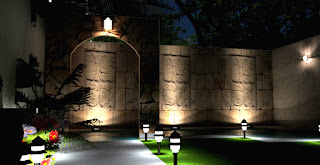 The 3D program also includes a 'walk-around' option so I could get multiple vantage points of the concept-pool.

When I felt good about how it was coming together, I'd combine Photoshop with the 3D design program mixing actual photos of the backyard with the virtual in the pic below. 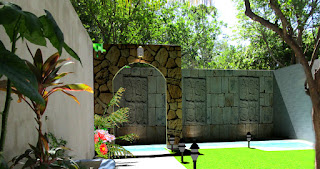 Once we had the design we wanted, we hired the local contractor Paulino May to build our pool with the designs provided and  they got to work.

Here is a pic of the pool at about 80% completion. 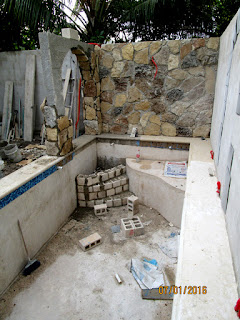 A few weeks later, this is what we got. 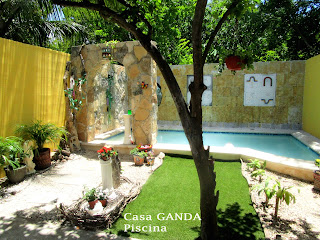 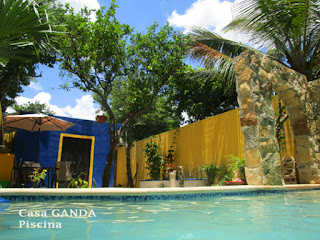 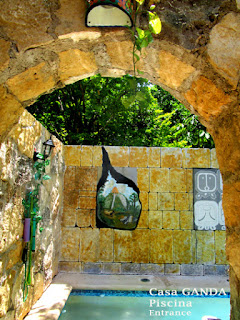 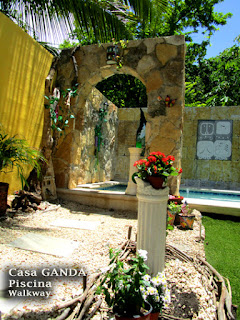 I worked with local artist Trino, who painted the back wall to represent an old Mayan wall with symbols we requested be added.  I helped finish the cutaway scene of Kulkulkan Chichen Itza in the distance. 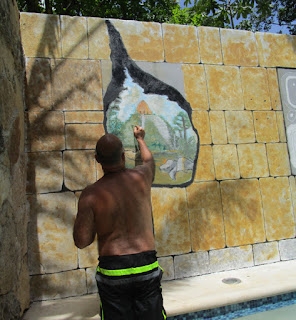 Using a design program helped minimize future construction problems and costs. It allowed for quick and easy visualization of our ideas, no matter how creative!  We got the pool we wanted and saved money by providing our Spanish-speaking contractor with a photo-realistic image of what we wanted.

If you are interested in my Virtual Home and Garden Design and Staging Services, email me for a free online consultation.
George@Aguilar.com